You can’t know the story of Carolina Bluewater Construction without first knowing the story of “Bruce’s Construction.” Bruce Quaintance (Scott Quaintance’s father) built custom homes in his native Salisbury for many years. After a year of commuting to the coast of North Carolina while building there, he decided to relocate his business to Ocean Isle Beach. He moved his family – children, parents, brothers and sisters – to the Ocean Isle Beach in 1980. 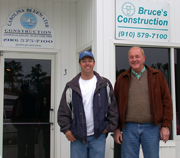 At that time, home construction was primarily on the beach and most of the homes were not-so-custom. The order of the day was how many bedrooms you could fit on the lot at the cheapest price. Even in this era of mass production building, Bruce stuck with his traditional building methods – stick by stick – no prefab anything.By the early 1990’s custom-building had caught on at Ocean Isle Beach, and Bruce’s Construction was well suited to the task. As his own foreman, Bruce Quaintance found that staying hands-on throughout the project gave him the control that was necessary to deliver a quality custom product.

Scott Quaintance (Bruce’s son) discovered CADD drawing in the 8th grade and quickly realized he had a flair for design and an analytical mind. He worked in the family construction business on weekends and during summer breaks. Scott considered majoring in Architecture or Civil Engineering in college. After researching each, he ultimately chose Civil Engineering. The degree helped him further develop his design skills, but also focused on the structural aspects of building that are so critical to construction in the coastal areas of North Carolina. After college Scott also got his contractor’s license.

Scott’s combination of education and background uniquely qualifies him as a custom builder. He has a knack for understanding a client's wishes and the skills to translate those wishes into the final design. From the dreaming and sketching stage to turning the key on the final dwelling, Scott concentrates on making the process smooth for the client and delivering the best possible product.